Functioning of Both the High Courts

Constitutional status:Under\Article 214of the Constitution which state that each state must have an operating High Court in its territorial jurisdiction. The SC exercises his power which confers under AP Reorganization Act 2014and President notify it in pursuance of Article 214.

No.of Judges: Thetotal sanction strength of the judges is 42. The present status is only 29 judges are working. As per Andhra Pradesh Reorganization Act 2014 the division of judges in ratio of 58:42 between Andhra Pradesh and Telangana.

Time of functioning: Both the separated high court start functioning from 1st January 2019.

Retirement age: 62 is the retiring age of HC judges, by 15th CA Act it is increased to 62 from 60. Salary of HC  judges given by state government and pension is given by centre govt.

Additional Judges: Additional judges can be appointed for not more than 2 years. This can be done when there is more pendency cases.

Removal of judges: Majority of total membership of house and not less than 2\3 members present and voting then resolution consented by President.

Establishment and Control of High Court

Article 222-Transfer of judges from one HC to other HC

Article 231– Establishment of HC for two or more states

Other High Courts In India

The Andhara Pradesh High Court will be 25th HC in India. Others are mention below. 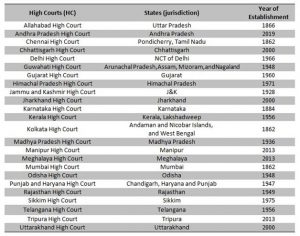 High Courts and their jurisdiction and Year establishment

Conclusion: The demand for separate HC for Telangana was started once the state was formed but it took time. The SC exercise his power for creation of HC. A separate HC is always better for a state, it reduces the burden of cases on common high court, speedy judgment can be delivered. People will not travel so far for hearing theirs cases. On whole we can say separate HC will save time, money and unnecessary efforts of government and population of the state. Creation of divisional Bench of HC is also better which is demanded by UP and Maharashtra.

About Classic IAS Academy 485 Articles
Classic IAS Academy is at the forefront of providing best IAS coaching in delhi, India. The Academy helps the aspirants to tap their innate analytical power to become successful in the exam.