Airpocalyose-III is a report released by Greenpeace analysing the data of 313 cities and towns of the country for air pollution in 2017. It questioned the non inclusion of 139 cities which crossed the National Ambient Air Quality Standards (NAAQS) in to the National Clean Air Programme (NCAP).

Highlights of the Report

Via a gazette notification using powers conferred to it udner the Air (Prevention and Control of Pollution) Act, 1981 the Central Pollution Control Board has released the following National Ambient Air Quality Standards (NAAQS). 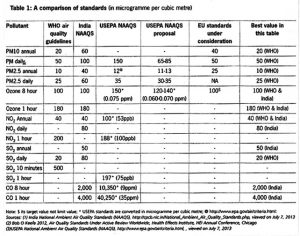 India is consistently topping the rankings for being the most polluted country in the world. Part due to climatic factors and majorly due to economic activities, an end to the current air pollution scenario is nowhere to be seen.

The particulate matter pollution which is more dangerous and causing high infant mortality is especially pronounced in the northern part of the country. In the southern part, though PM pollution is less, there is an increase in gaseous pollution. Overall the pollution levels in the country are affecting its economic productivity in the form of rising morbidity of people due to pollution.

Many programmes have been launched to tackle the situation but reduction in pollution levels are nowhere to be seen. On their part, private enterprises are putting efforts to reduce their air pollution footprint. But, more efforts are needed to tackle air pollution in our country at a fast pace.

About Classic IAS Academy 420 Articles
Classic IAS Academy is at the forefront of providing best IAS coaching in delhi, India. The Academy helps the aspirants to tap their innate analytical power to become successful in the exam.